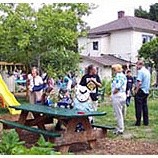 "Instant Cohousing?" Temescal Creek writes, "We sometimes joke that we are the fastest cohousing community ever formed."

The community was founded in March, 1999, in escrow after just three months of meetings, when a group of five families opened escrow on this "retrofit" cohousing neighborhood. Members bought three nextdoor 1920s duplexes, and later two more houses nextdoor, with gradual expansion since then. Later, it created a common house with a unit above; selling the unit helped pay for the Common House, which was financed using individual home-equity lines of credit.

It started as "Tenants In Common" legally and later went through the condominium conversion process, becoming not one but initially two separate homeowner associations (HOAs). Members were paid for the year-long work of obtaining planning approvals and an easement from a nextdoor commercial property owner.

The group writes: We're called a retrofit community because we transformed an existing neighborhood into a cohousing community, rather than building from the ground up. Our vision was to create and live in a community that fosters harmony with each other, the larger community and the environment. Our first step in creating our neighborhood was to purchase three adjacent 1920s duplexes in North Oakland's Temescal district as tenants-in-common from a sympathetic property owner. We later bought two adjacent houses on the block. The property is a one-mile walk from BART, major bus routes and several commercial streets.