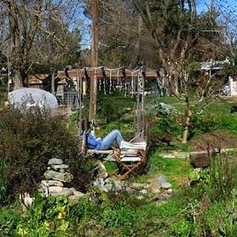 A cohousing community in Davis, California

Because of the way it grew, our community is termed "retrofit cohousing" and is a leading example of how to create community in existing neighborhoods.

The N Street Cohousing community began as a standard mid-1950's subdivision in Davis, California. In 1986, the first two houses were joined when Kevin Wolf bought what is now the common house and his wife, Linda Cloud, purchased the house next door. Since 1986, the community has grown to 19 houses by a process of adding one house at a time as they become available, taking down the fences between them and integrating the backyard landscaping. We have also added three houses from across the street. Currently, approximately 60 adults and 5-10 kids (depending on the year) reside here. The ownership structure is diverse - some of the units are owned by community residents, some by local and absentee landlords, and others as partnerships of former/current tenants in the community.