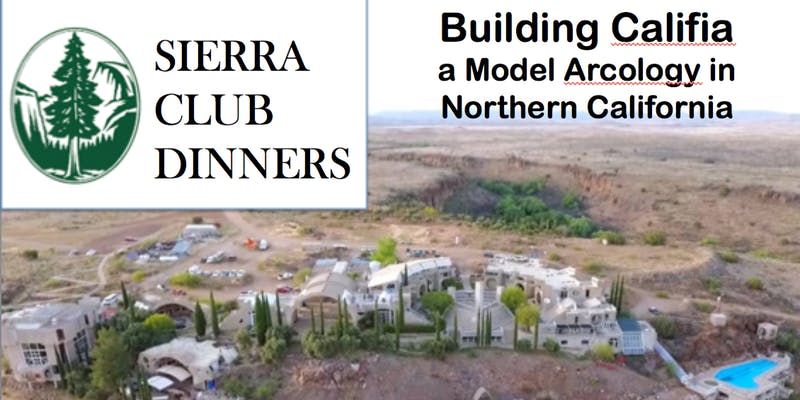 Urban designer Paolo Soleri developed a methodology of ecological city design in the late 1960s he called “arcology” (architecture+ecology) and sought to test his ideas with Arcosanti, a pioneering model town in the Arizona desert 60 miles north of Phoenix. Although the full build out of Arcosanti has never been realized, it has served as an inspiring “urban laboratory” and experiential learning center, hosting workshops and events and providing tours to hundreds of thousands of visitors. (EBCOHO co-organizers Raines and Betsy have been several times, including recently for the Global Ecovillage Network North American Alliance CoLab)

In the early 2000s the San Francisco-based Green Century Institute on sustainable communities explored the development of Califia, a model arcology in Northern California. The idea was (and still is) to learn from Arcosanti and related projects, and tap into the substantial cultural and business resources of the Bay Area to create something truly extraordinary: a model community that the rest of the world can participate in, learn from and build upon. Might now be the time to initiate such a visionary enterprise? With the specter of sea-level rise at our doorstep and the prospect of millions of climate change refugees, arcology may well be a vital piece of the puzzle when it comes to planning required new urban centers, and refashioning existing cities.

Come join us as sustainable community expert Michael Gosney provides an in-depth exploration of ecocity concepts and the vital import of city design and the built environment in the overall sustainability and human needs equations. An overarching theme is the position of cities in today’s world as the true network of civilization and the evolutionary potential they contain. This potential has been severely limited by the dystopian web of nation-states and profit-driven enterprises that usurp the authority of real “place” with artificial boundaries, external financial and political controls, and constraining regulations. Gosney will share a range of resources and projects that are contributing to the emerging new paradigm of ecologically sound urban planning, and review some of the potential scenarios for seeing Califia – and other large scale ecocities - actually come to life!

Michael Gosney served on the Board of Arcosanti in the 90s where he co-produced the Paradox Conference series with Paolo Soleri, and co-founded the Green Century Institute on sustainable communities in San Francisco. Michael is a longtime technology pioneer, environmental thought leader and online and on-the-ground community builder. He has authored 17 books, and has worked with both festival culture (Burning Man, Earthdance International) and intentional communities (Arcosanti, Auroville, Damanhur). He is currently co-developing the Communitas.Zone collaboration network to facilitate greater synergies among these groups through TechneVerde.org/BFI.org, and supporting the development of the Radish.org collective intelligence platform.

RSVP here, but get your tickets at the door or directly via EventBrite:

Directions: Go ALL the way to the west end of University Avenue, Berkeley, until you get to the water. Then turn right, and at the very end of the road (Seawall Drive), you will find ample parking for the Berkeley Yacht Club. See you there!