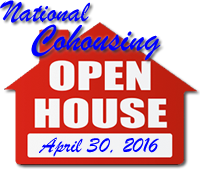 Published on the National Cohousing Blog March 29,2016
Some times updated and a new community added April 11.

We're excited to participate in the upcoming National Cohousing Open House Day. Our home community, Berkeley (CA) Cohousing, has had low turnover (no resales in over 12 years!), and only rarely welcomes outside groups, but we're opening up for a few hours on Saturday, April 30. We're a smaller community (14 homes in the core community, plus an associate member home nextdoor), with strong demand, and we value our privacy.

Part of why my wife Betsy Morris and I organize regional and statewide cohousing groups is to have somewhere to send the many seekers who inquire about openings or visiting each month.

When we do have a tour come through, we give our neighbors plenty of warning, so residents can choose whether they want to participate or even be visible as the group comes through. Sometimes, this can produce a "neutron bomb" effect, where the you get to see the physical structures, but few of the people... and the people is the best part of living in community. As FIC Executive Director Sky Blue says in his "Like Living in a Zoo" blog entry featured in today's Cohousing Now e-zine, we chose to live in cohousing because it offers us every day the choice of privacy or community, and nobody likes having a choice taken away.

So I was delighted to find that several neighbors were willing to co-host our open house as part of the national event. We intentionally scheduled our open hours early in the day (8-11 AM) so that people could start here and then go explore the many other communities in the area... half a dozen within a few miles, and more than a dozen within driving distance. By coordinating with other area communities and their schedules, we can facilitate self-guided tours, with an itinerary that could look like this (consult the National Cohousing Open House page for latest open times for each community):

We're working with other area established and forming cohousing communities to add more options to this list, including perhaps an evening reception at a just-moved-in senior cohousing community to wrap up a fun day. And additional showings of Within Reach, a documentary about a bike journey to over 100 sustainable communities, including several cohousing neighborhoods and ecovillages.

And if you're traveling to visit the area, stick around for the regularly-scheduled Pleasant Hill Cohousing tour the next afternoon, on the traditional first Sunday.

And I'm glad to see that we're not alone.. it looks like the Madison (WI) communities are also coordinating, and I wouldn't be surprised to see the same in other regions; at first glance, it looks like the timing works so you can put together your own tours in Western Massachusetts/Connecticut/New Hampshire/Vermont and in the Sacramento-Fair Oaks-Nevada City-Grass Valley corridor here in California.

So whatever you do, get out there and make the most of the day. Explore and connect, learn and listen, visit and engage. Who knows, you could just happen to come across your path to community living. 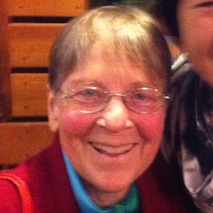